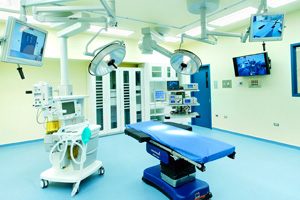 Even though private hospitals are more expensive than public care, many foreigners feel more comfortable using them as their facilities and procedures are very similar to what they're used to state side. The doctors are well qualified, highly specialized and all speck english. The accommodations are first rate and the food is actually pretty good!

Private hospitals are often referred to as private clinics even if they are as large as a hospital. These private clinics are usually newer, flashier and have nicer accommodations, but subsequently, the cost is usually out of reach for the average Costa Rican. But for someone from North America, the prices are comparatively lower than they're used to. Though there are charges for most services and procedures, they are a fraction of what you'd expect to pay state-side. For instance:

Private doctor consultations usually start at around $50 which is usually what your co-pay would be in North America. A hospital stay is around $200 per day with a private room and bathroom. And if you're willing to have a room mate, it could be as low as $100 a day. Child birth runs $3,000 but could be more if there are complications. Comparatively, in North America, this would easily exceed $20,000 without insurance.

Visitation is far more relaxed than in public hospitals. They are not nearly as stringent with their visiting hours and even allow for guests or care takers to stay with the patient around the clock if needed.

The primary goal of this hospital is to provide excellent health care for a variety of procedures and they regularly reinvest their revenue back into the clinic which is how it has grown into a major player in Costa Rica's medical tourism market. With its state of the art hospital combined with 5 star accommodations, this facility is better, newer, and nicer than the majority of hospitals in North America. The hospital does maternity as well as a variety of other corrective surgeries, and cosmetic surgeries also. Despite it's glean and polish, The Clinica Catolica is considered one of the more affordable clinics that offers a variety of options, payment plans.

This is a massive facility that takes up an entire city block in the center of San Jose and is considered to be a first class medical facility. They offer just about every type of specialist under the sun, but are most noted for their cardiology and maternity specialists. The facility consists of 13 operating rooms, 80 beds plus 25 private patient suites, 16 exam rooms and modern equipment and emergency facilities.

Though smaller in size compared to other facilities on this list, this clinic mainly specializes in women's health, maternity and cosmetic surgery. It's considered one of the best and most affordable private clinics to have a baby in.

This is most impressive, modern, and newest facility in Costa Rica (at the time of this writing). If you're looking for that 'North America' look to your hospital, CIMA (Centro Internacional de Medicina) fits the bill. These spotless facilities perform all types of services with the most modern equipment and highly trained doctors. CIMA has over 500 physicians accredited in over 60 specialties, trained in the world’s best universities and all of them speak english. Though there is a price for this spotless facility, CIMA tries to keep its prices within 10% of the local competition.